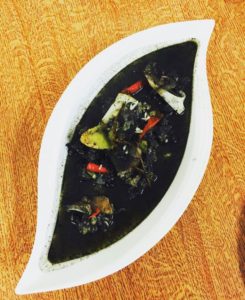 It’s a beef or goat soup-stew of Tausug origin from Sulu (Jolo) in the Southern Philippines which is always served at weddings, often also at any other celebration, and not uncommonly after Ramadan. It’s most salient characteristic is that it is black – greenish – dark grey in colour, and may seem singularly unappetizing to the novio. The blackness is due to the inclusion of burnt coconut as a flavouring, that being an ingredient unique to the Tausug culinary environment.To make tiyula itum, meat chunks are rubbed with pamapa, then braised with fried onion and garlic. Turmeric, ginger, and galangal (langkuwas) are added, and after a little bit more simmering, liquid is poured in. It is cooked for ten more minutes and served with rice or ketupat.TIYULA ITUM RECIPE

Cut the lemongrass into two or three inch long segments.Bruise them by whacking, which helps release the flavour.Roast the coconut shreds in an iron skillet till they are a disturbingly dark hue, black even. Then grind this fine, and add two or three tablespoons of cooking oil. Rub this all over the meat, which you have washed very well to remove all traces of blood.Fry the onion golden, add the garlic and ginger, fry a bit more. Add the meat and lemongrass, cook till very fragrant, four or five minutes. Add the powdered spices and sugar, plus the sambal or Sriracha sauce, stir to distribute over heat. Let it gently seethe on low for a few minutes, stir to prevent it scorching.Add the liquid — about two cups each of water, broth, and coconut milk — and raise to a boil. Turn low, and simmer for about ten minutes.Some whole red chilies can be thrown on top.Coconut milk is not necessary, and often left out. The amount of liquid is variable, and depends on your own preference. If you are making it soupy, increase the quantity of charred coconut, spices, and chili.If more stewy, decrease.In the traditional recipe, chunks of fresh coconut meat are charred over flames till they are easy to pound. That is rather hard to manage here, so instead I utilize shredded coconut, precisely like what is commonly made into serundeng.Note that turmeric and galangal are used fresh in Southeast Asia, but are hard to find in anything other than powdered form in the West. They will consequently taste a little different when added. Fresh chili pepper leaves (daon lara) are sometimes thrown in; these will have a slightly bitter taste. Chopped tomato can also be included for flavour, but is not, strictly speaking, traditional. Regarding the dried ginger, I tend to employ that with galangal for a slightly broader gingery influence.You could also add a little temo kuntji.